You know you're in Russia when (this one's for you, Rikk)...you find yourself in a 2nd-floor VIP booth at a club located in the seediest neighborhood you can remember being in so far in Moscow, where there are somehow no pedestrians anywhere amongst the abandoned warehouses, mud and gravel, yet the line to get in stretches out the door, and you're listening to a Euro-remix of Nelly Furtado's "Promiscuous Girl" and watching a bunch of promiscuous people dancing to it from a room that normally costs $700/night just to sit in, and you're having a conversation with the club's gorgeous PR woman, because all the clubs here have gorgeous PR people, male and female, who will cater to your every need if you show up and you know somebody who knows somebody else that happens to be kind of affiliated with someone else slightly important, and you and this woman are talking about God and Catholicism and Jews loudly over the earth-shattering bass coming from the soundsystem and your eyes are clogging shut because everyone in the room is smoking, including, to your surprise, yourself, and you decide, "Shit, it's time to go, I'm breaking my own rules here," and you wander out into the night and there is still no one around in this barren wasteland of a neighborhood, and a beat-up car comes barreling down the wet street so you stick your hand out to stop it, and as usual it stops, and the driver opens the door and you try to negotiate the price for the ride but you use the word for "30" instead of "300", which the driver finds quite amusing, but he agrees to take you home, and as he barrels through the streets of south Moscow at 4am, between the naively saccharine Russian pop and R&B clogging the playlist of whatever radio station he is listening to, up pops R.E.M.'s "Losing My Religion," seemingly the most random fucking thing you can imagine until you remember that you were just talking about religion (or rather, screaming over the Eurodisco about religion) with a woman in a room that costs $700 to sit in. 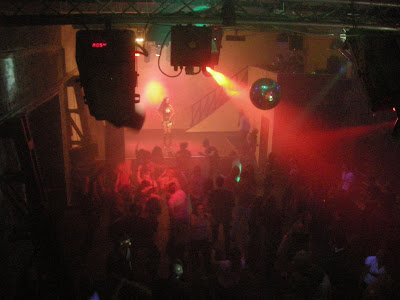 The view from the room that the aforementioned theological discussion took place. 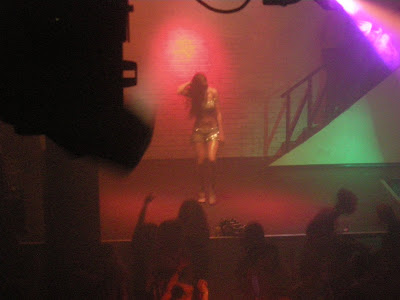 A go-go dancer, one of many, at this club. 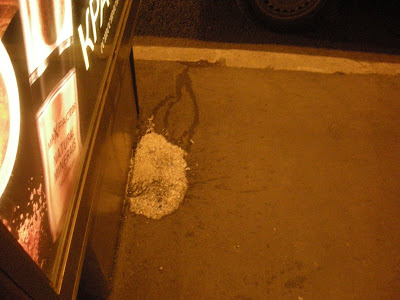 Look! Vomit! And it's still fresh! Usually you only see the splatter stain but the content has been picked away by either the ravens or the rats. I kid you not, these stains are everywhere. 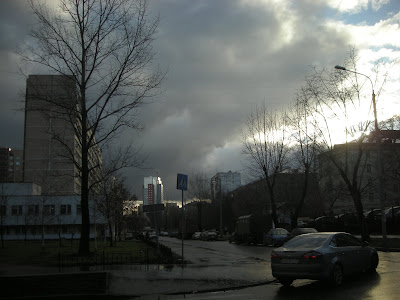 Look! It's 2pm in north Moscow but it looks like a) the fucking Apocalypse and b) 6pm. Can't wait for winter to really kick in. 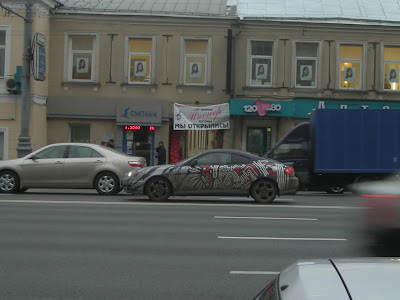 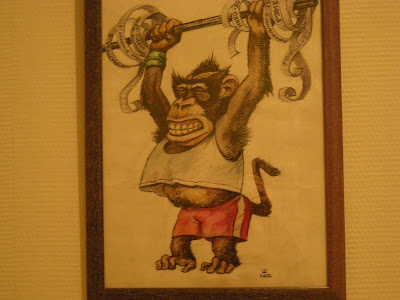 So I teach English to a few middle-aged Russian guys; one of them is the editor of "Kinobusiness" magazine, about the film industry in Russia. We meet once a week and he just talks for 90 minutes and I correct him when he says something incorrectly. He has this drawing hanging on his wall; it's supposed to represent what it's like to make a movie in Russia. The monkey is lifting reels of film on his barbell. 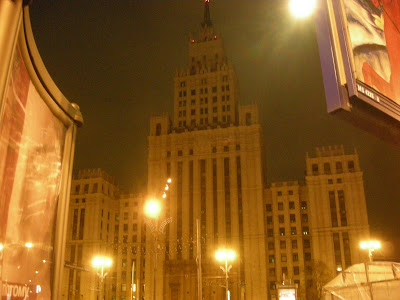 This is one of the Seven Sisters, seven enormous buildings built by Stalin in the late 40s/early 50s. This one is the Red Gates building, which is a 3-minute walk from my apartment. 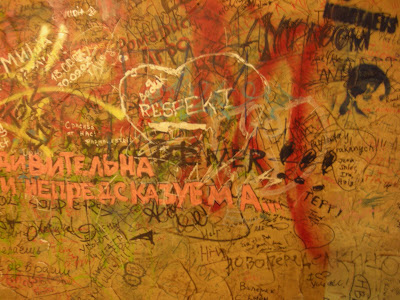 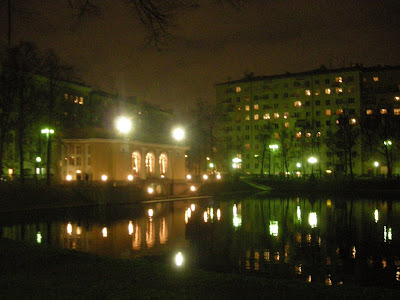 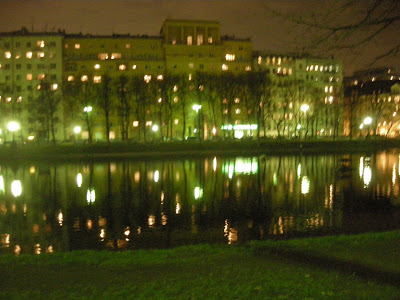 These shots are from Patriarch's Ponds, which is where the Devil appears at the beginning of Mikhail Bulgakov's novel "The Master and Margarita." 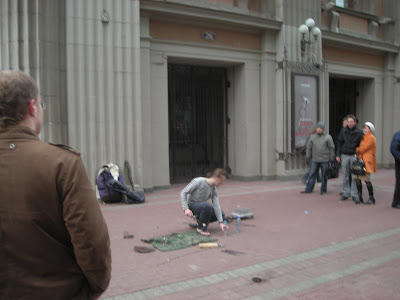 So this guy was performing "magic" in the Arbat, which is the most touristy area of Moscow outside of Red Square. He had a large collection of nails, glass, swords and fire. One of his tricks was setting a pile of broken glass on fire and then putting that out with his bare feet. Then he put a large needle through the skin on his arm. Between each trick he would walk around with a huge black trash bag, asking the spectators to throw money into it. 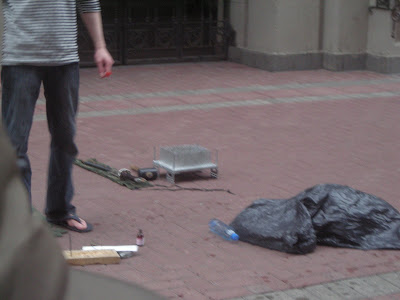 His master's nails, embedded on a piece of wood. And trash bag. 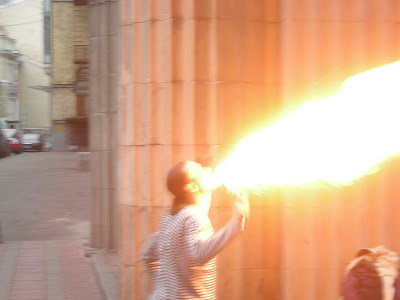 He did manage to blow fire, which was cool. 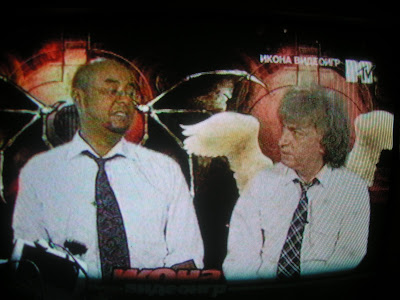 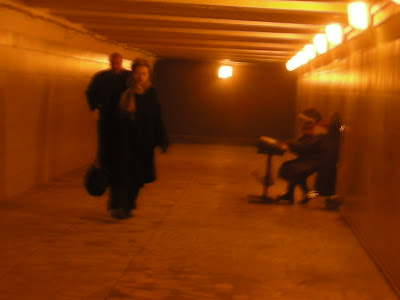 This lady was tearing it up in one of the underground crosswalks on a Casio. 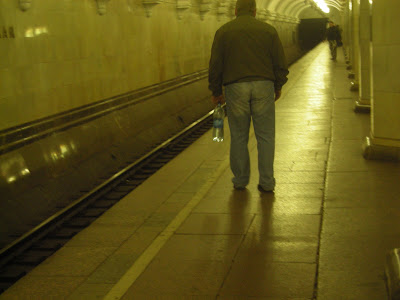 
Bonus: a real, authentic 2am gypsy cab ride in Moscow. A lame attempt to recreate that one scene in Andrei Tarkovsky's "Solaris." Forgive the length. But check that turtleneck! And listen to that pop jam! All that is missing is the smell of cheap cigarettes...if only that could be digitally processed and blogged as well....
Posted by MC Nappropriate at 4:31 PM